Copies of both Adventures of D Mouse and D Mouse's Christmas Adventure will be available to purchase.

A portion of the proceeds from 2010 sales of her newest chapter book for children, "D Mouse's Christmas Adventure", will be donated to Epic Arts Cambodia in honor of her son. Epic Arts Cambodia works to promote the message "every person counts" through training persons with disabilities in education and the performing arts.

You can learn more about Epic Arts HERE.

View Larger Map
Posted by Holly at 10:53 PM No comments:

Email ThisBlogThis!Share to TwitterShare to FacebookShare to Pinterest
Labels: announcements

Here are some free coloring pages you can download and print from the new book, D Mouse's Christmas Adventure! Feel free to share them with your friends, but please include a link back to this website. :) 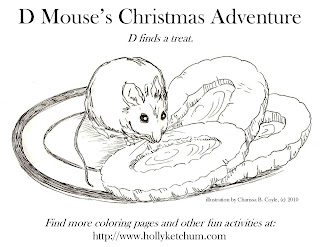 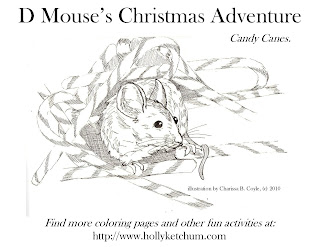 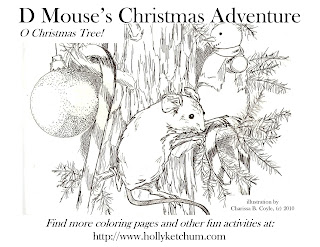 4. D Keeps Warm in the Cold - download JPG or PDF 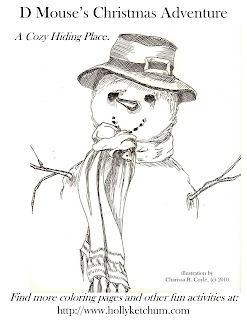 A BIG Thanks to Charissa for sharing these illustrations. Enjoy!
Posted by Holly at 6:43 PM No comments:

On Saturday, October 9, 2010 I will be participating in the Author's Fair at the Springfield Library Center (on South Campbell Street in Springfield, MO). The event will last from 11:00 a.m. to 2:00 p.m. There will be approximately 40 authors present, and you are invited to join us for the chance to peruse/purchase books, chat with the authors, or have books signed.

Email ThisBlogThis!Share to TwitterShare to FacebookShare to Pinterest
Labels: events

We'll be sharing more in the days to come, but this is the first announcement that D Mouse's Christmas Adventure is now available for purchase. 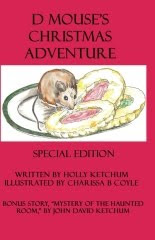 vided more wonderful illustrations, which you can also see on her Facebook page, HERE.

You can purchase the book online at Amazon (HERE) or Create Space (HERE). The price is $10.

A portion of proceeds of the 2010 sells will go to support Epic Arts, an organization in Cambodia supporting people with disabilities to enjoy life and make a living through creative expression. (More info HERE)

- Available as a PDF download HERE.
Posted by Holly at 8:15 PM No comments:

Email ThisBlogThis!Share to TwitterShare to FacebookShare to Pinterest
Labels: Just for fun

Adventures of D Mouse is now available for purchase at Borders bookstore in Springfield, MO. Borders is located in Primrose Marketplace shopping center off of Glenstone Avenue, just south of Battlefield Road. Look for the book in the "Local interest" section, or ask a customer service representative for help....

If you know anyone living in or visiting the Springfield, MO area that might be interested, please pass on the news! Thanks!

View Larger Map
Posted by Holly at 7:38 PM No comments:

Holly will be selling and signing books at Farmer's Merchant in Owensville, Missouri on August 5 from 11:00 a.m. to 1:00 p.m.

Hope to see you there!
Posted by Holly at 6:47 PM No comments:

Email ThisBlogThis!Share to TwitterShare to FacebookShare to Pinterest
Labels: events

Here are some free coloring pages you can download and print. Feel free to share them with your friends, but please include a link back to this website. :)
1. Betty Redbreast Meets D Mouse - download JPG or PDF 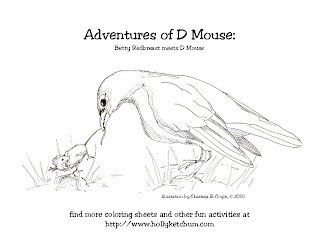 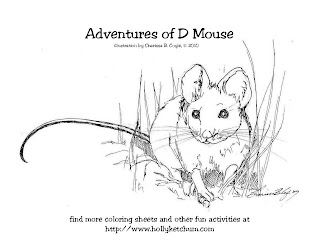 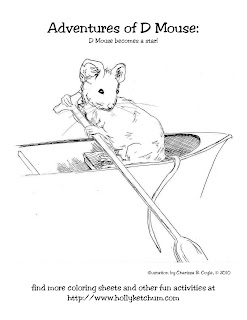 A BIG Thanks to Charissa for sharing these illustrations. Enjoy!
Posted by Dave K at 9:26 AM No comments:

Children can now send me their own stories, artwork, poems, etc. about D Mouse and his friends and have a chance to get them posted on my website. Check out the Kids Create page on hollyketchum.com for more details.
Posted by Holly at 9:14 AM No comments:

Fun with a Mouse Puppet

We went to the Springfield Nature Center this morning and discovered among their puppets one of a mouse. We had fun playing with it, pretending it was D. 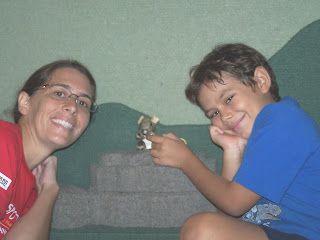 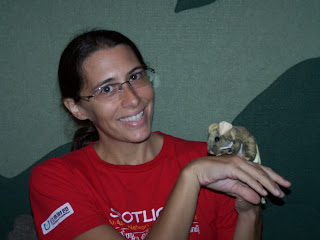 Email ThisBlogThis!Share to TwitterShare to FacebookShare to Pinterest
Labels: Just for fun

This post was written by the author's husband to introduce readers of his blog to the book.
Holly's written a new children's book called Adventures of D Mouse. The (delightful!) illustrations are by our good friend, Charissa B. Coyle.

Join Betty Redbreast as she shares stories of her good friend, D Mouse. From finding an unusual home to flying a kite, from making trouble to making a movie, D is a mouse with an appetite for friendship, excitement, and cheese, of course.

When I was living in the Bay Area, there was a man who lived near the Golden Gate Park with the longest dredlocks I have ever seen. He carried them around on a staff. I didn't know him, but he was a bit of an icon in the Haight. It was rumored that a mouse lived in his hair.

Holly was telling this story to John when he said, "I bet that mouse had lots of adventures!"

And so the book was born.

Holly's finished the first draft of some Christmas adventures. Time to put my editor cap back on. (See, everyone, my undergraduate degree in English is NOT useless!) ;)

Visit Amazon.com or CreateSpace.com to learn more or purchase the book.

Holly has a Facebook page, too, HERE. You can join it to get updates, including future books she writes.

Would you like to receive updates from Holly automatically? There are a few options. :)

1. Receive all posts of this blog via email - straight to your inbox.

Follow this blog
Posted by Dave K at 9:54 PM No comments: